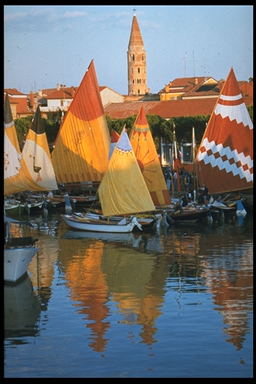 Caorle, one of the most picturesque areas on the Upper Adriatic, is a town that has transformed into a modern tourism and seaside centre.

This picturesque holiday area has not lost its cultural identity as a fishing hamlet, where the intricate narrow streets of the historic centre recall the little streets and squares of Venice. Until the mid-19th century, the historic centre was covered with canals which, over the course of time, were filled in.

With 18 kilometres of perfectly equipped beach and overlooking hotels of all categories, Caorle offers the very highest quality tourism, with top-level services, excellently-equipped docks and an extremely long beach area that has often been awarded the European Blue Flag.

Caorle is also synonymous with unspoilt nature, thanks to its marvellous Northern Lagoon, which is so picturesque that it even captured the attention of Ernest Hemingway, who described its wonders in “Across the River and Into the Trees”. The Lagoon still features typical "casoni", buildings that in the recent past were used by fishermen during the fishing season.

Folklore, warmth, professionalism and quality services: Caorle has all this, but above all it is a little treasure chest that contains jewels of art, like the cathedral dating back to 1038 with its characteristic, cylindrical bell tower from the same period, surmounted by a conical cup in Romanesque style from the same era.